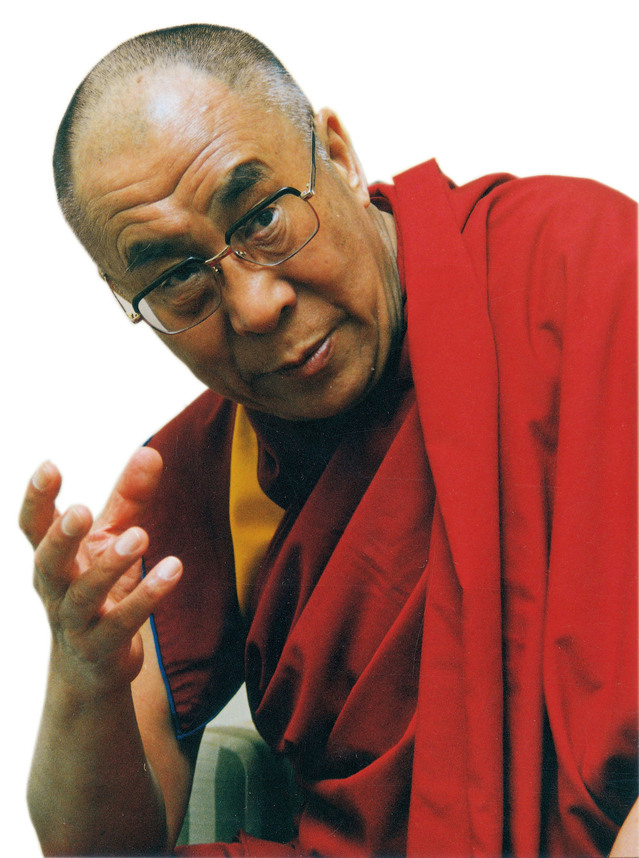 Dalai Lama is a title for the elite spiritual leader given by the Tibetan people. The Dalai Lamas
are known to be the expression of Avalokiteshvara, the patron saint of Tibet.

The Dalai Lama means Ocean of Wisdom; the name Dalai is a Mongolic word which means
“ocean” or “big,” which comes from the Mongolian title Dalaiyin gan or Dalaiin Khan, translated
as Gyatso in Tibetan. And the word lama, which is a Tibetan word, means “master.”

STORY BEHIND THE FORMATION OF DALAI LAMA

Avalokitesvara, the bodhisattva of compassion, back in time, vowed the Buddha to guide and
protect the people of Tibet. In the late Middle Ages, he established his master plan to fulfill his
promise, which was by the incarnation of the Dalai Lama theocracy.

The Dalai Lama’s recognition supported the unique Tibetan tradition of reincarnation of students,
which has been of immense help to bring peace and enlightenment to groups of people.
The most important sign for being the Dalai Lama involves having the vision of the predecessors’
predictive letter and other instructions and indications; the reincarnation being able to recall and
recognize about his previous life and speaking about it; identifying people from his past life.
Additional methods used, which include asking reliable spiritual masters for their foretelling and
the predictions of mundane oracles, who appear through mediums in a trance, and observe the
visions that manifest in sacred lakes of protectors like Lhamoi Latso, a sacred lake south of
Lhasa.

BIOGRAPHIES OF DALAI LAMAS TILL DATE

The first Dalai Lama was GedHoliness. His Holiness was born in 1391 in Gyurmey Rupa, in
Tsang region of central Tibet. His born was PemHoliness.
His Holiness did his primary studies of reading and writing Tibetan script with Gya-Ton Tsenda
Pa-La. At the age of fourteen, he took his novice vows from Khenchen Drupa Sherab, abbot of
Narthang monastery, who gave him the holy name of Gedun Drupa. Later, he took the Gelong
vows (full ordination) from the abbot in the year 1411.

The young Gedun Drupa became a disciple of the Great Tsongkhapa, the founder of the
Gelugpa School. With his loyalty and devotion, Gedun Drupa received a brand new set of robes

by Tsongkhapa, who believed Gedun Drupa would spread the teaching of Buddhism all over
Tibet.

The first Dalai Lama was known to be a great person with a high level of scholarship and
knowledge. He had written more than eight books based on Buddha’s teachings and philosophy.
He founded the Tashi Lhunpo Monastery, which one of the most prominent monastic University
of Gelugpa School located in ShHoliness
His Holiness Gedun Drupa died at the age of eighty-four at Tashi Lhunpo Monastery.

The second Dalai Lama, Gedun Gyatso, was born in 1475 in Tanag Sekme, near Shigatse in the
Tsang region of central Tibet. He belonged to a farming family.

Gedun Gyatso disclosed his name as Pema Dorjee, the birth name of First Dalai Lama, to his
parents when he was able to speak.

In 1517, Gedun Gyatso was the one to become the abbot of the Drepung monastery and able to
revive the Monlam Chenmo, the Great Prayer Festival, and presided over the events with monks
from the three great monastic Universities of Gelugpa Sect. He succeeds in being the abbot of
Sera monastery in 1525.
He lived for 67 years and left the earth in 1542.

Sonam Gyatso, who was born in 1543, became the third Dalai Lama. His birthplace was Tolung,
near Lhasa. He belonged to a wealthy family.

His given name was Ranu Sicho Pelzang. In 1546 he was recognized as the reincarnation of
Gedun Gyatso. He accompanied the Drepung monastery.
Sonam Gyatso became the abbot of Drepung monastery and abbot of Sera monastery by the year
1552 and 1558 respectively. In 1574 he established the Namgyal monastery, which was once
known to be as Phende Lekshe Ling. This monastery served as the Dalai Lama’s monastery.

It was during his time the Mongolian King Altan Khan officially introduced the title of Dalai
Lama.

The third Dalai Lama died in 1588 while teaching in Mongolia.

The fourth Dalai Lama, named as Yonten Gyatso was born in 1589 in Mongolia to the Chokar
tribal chieftain Tsultrim Choeje, who was the grandson of Altan Khan.

The fourth Dalai Lama was recognized as a reincarnation by the abbot of Gaden monastery with
the predictions from auspicious signs at his birth.

At the age of twelve, he shifted to Tibet. In 1614, he took the Gelong vows from the Fourth
Panchen Lama. Later he became the abbot of Drepung monastery and then Sera monastery.
Yonten Gyatso died at the age of twenty-seven in 1617.

The fifth Dalai Lama, Lobsang Gyatso, was native of Lhoka Chingwar Taktse, south of Lhasa,
who was born in 1617.

He was recognized as the Dalai Lama by Sonam Choephel, who was the chief attendant of the
Fourth Dalai Lama. The fact about him being Dalai Lama was kept a secret due to the political
situations. When the thing returned to normal, he was taken to the Drepung monastery and was
named Ngawang Lobsang Gyatso.

In 1642, the Dalai Lama ennobled as both the spiritual and political leader of Tibet.
In 1645, the Dalai Lama established Potala Palace on the Red hill which took almost forty- three
years to complete.

The fifth Dalai Lama was a great scholar, guiding in many political as well as spiritual activities.
He wrote many books, established two educational institutions. He words spoken by the Dalai
Lama carried conviction and influenced many rulers beyond the borders of Tibet.
He died at the age of sixty-five in 1682.

The sixth Dalai Lama, Tsangyang Gyatso, was inherent in the region of Mon Tawang (Arunachal
Pradesh) India in 1682.

Tsangayang Gyatso, at the age of fourteen in 1697, was enthroned as sixth Dalai Lama. In 1701
due to the political disturbances, the Dalai Lama left his religious study, chose the outdoor life,
and had no plans to take fully ordained vows. In 1706 he died on his way to China.

The seventh Dalai Lama, Kelsang Gyatso, was born in 1208. Thupten Jampaling Monastery
recognized his reincarnations, but due to the chaotic political situation sent him to the Kumbum
monastery.

In 1720, he enthroned in the Potala Palace, where he got his name Kelsang Gyatso. He studied
the entire major Buddhist philosophical treatises and became a master in both the sutra and
tantra.

In 1751, at the age of 43, he abolished the post of Desi and became the spiritual and political
leader of Tibet. At the age of 45, he founded the Tse School in Potala Palace and built a new
palace of Norling Kalsang Phodrang.
He died in 1757.

The eight Dalai Lama, Jamphel Gyatso, was born in 1758 at Thobgyal (Lhari Gang) the
southwestern Tibet.
The parents of eight Dalai lamas recognized many of the spiritual signs after his birth. At the age
of two and a half years old, he went through the recognition ceremony, and he got the name
Jamphel Gyatso.

In 1762, the boy moved to Lhasa and enthroned in the Potala Palace. He built the famous park
called Norbulingka and also Summer Palace on the outskirts of Lhasa. He died at the age of 47.

The Ninth Dalai Lama, Lungtok Gyatso, belongs to Dan Chokhor, and his date of birth was

The tenth Dalai Lama, Tsultrim Gyatso, was a resident of Lithan Kham since his birth in 1816.

In 1822, he was recognized and inaugurated in Potala Palace. In 1831 he reconstructed the Potala
Palace. However, due to his poor health condition, he died in 1837.

The eleventh Dalai Lama, Khendrup Gyatso was born in 1838 at Gathar in Kham Minyak.

In 1841 he was recognized as the Dalai Lama. In 1842, he got elevated in the Potala Palace, and
at the age of eleven, he took the novice vows from the Panchen Lama. He died in 1856 in the
Potala Palace.

The twelfth Dalai Lama, Trinley Gyatso, was born in 1856 in Lhoka.

The next thirteenth Dalai Lama, Thupten Gyatso, a native of Langdon in Dagpo, central Thakpo
Tibet, was delivered in 1876.

In 1877, he recognized as the reincarnation of the 12th Dalai Lama. In the following year, he
exalted in the Grand Reception Hall at Potala Palace. In 1882, at age six, the Dalai Lama was
formally ordained as a novice monk.

In 1895 he took the full monk ordination, and on 27 September of the same year, he assumed the
political and spiritual authority of Tibet. He survived during the ordeals of the British invasion of
Tibet in 1904. His endurance despite difficult times of the Chinese attack in his country succeeds
in 1909.
During his period, he went through many political disturbances and tried to bring the
enhancement required.
The thirteenth Dalai Lama was the one to introduce the first Tibetan currency notes and coins. In
February 1913, he made public the five point’s statement reasserting Tibet’s Independence. Also,
in 1913 he established the first post office in Tibet.
The 13th Dalai Lama was known to be intellectual, and his aim was the modernization of Tibet.
In 1933 he died at the age of fifty-eight.

The fourteenth and the present Dalai Lama, Tenzin Gyatso, was born in 1935 and was named
Lhamo Dhondrub. He was born in the province of Amdo in a village called Takster in
northeastern Tibet.

At five years old, he was enrolled in the local monastery for his pieces of training by the highest
monks at Lhasa.
He crowned at the age of 15 in 1950 amidst the beginning of troubles in China. He continued his
studies until the age of 25.

After that, Lhamo Dhondrub was renamed as Jamphel Ngawang Lobsang Yeshe Tenzin Gyatso
and took leadership of the country Tibet.

In 1950, during the political change in China, a conflict of bringing Tibet to Chinese control,
many were killed. Due to the fear of being killed by the Chinese government, the Dalai Lama
fled to India with his followers and has been residing there.

With the agreement of the government of India, the Dalai Lama formed the Tibetan Government
in Dharamshala in India. The Dalai Lama was known for his charismatic manner, and highly
intellectual ability drew a lot of support and follower for Buddhism and the Tibetan resistance
movement.

In 1963, His Holiness presented a draft democratic constitution for Tibet, which provides
detailed guidelines on the functioning of the Tibetan Administration concerning Tibetans living
in exile Holiness. His Holiness proposed a Five-Point Peace Plan for Tibet as the first step
towards a peaceful solution of the worsening Holinesson in Holiness.
His Holiness, the Dalai Lama, is also known as a man of peace as he received the Nobel Peace
Prize in 1989 for his nonviolent struggle for the liberation of Holiness
His Holiness has traveled to more than 68 countries and has received over 150 awards, honors in
recognition of his idea of peace and nonviolence solutions. He has also authored more than 110
books.


On 14 March 2011, His Holiness wrote to the Assembly of Tibetan People’s Deputies for the
political retirement. He also mentioned ending the custom of the Dalai Lamas to handle both the
Spiritual and governmental authorities only treating the responsible spiritual Holiness
His Holiness on 24 September 2011, also mentioned the precise guidelines for the recognition of
the next Dalai Lama.

Some Quick Information about Dalai Lama

https://gossipsmag.com/dalai-lama/(opens in a new tab)