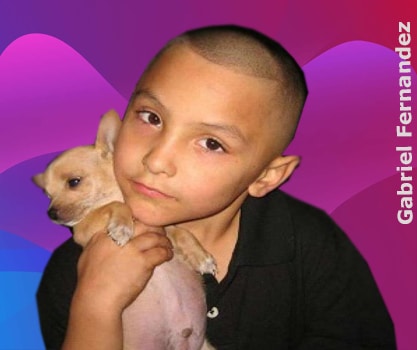 Who is Gabriel Fernandez?

Eight years old child whose dream was to live happily with his family. A sweet and kind hearted child who was about to start his happy life was unfortunately killed by his own psychopath mother. He was so sweet and humble that he never dared to go against his mother and her torture.

Where did Gabriel Fernandez live?

Gabriel Fernandez was born in February 21st in 2005 in one of the hospital of LA, California. His mother pearl was not that happy with his birth as she thinks he was guy. Even other media mention about his sexuality but none of them prove about his common. His mother left him all alone so he lived with his uncle and his partner but after few years his grandparents especially his grandmother took his responsibility and he lived with her in LA. Till that time he was like happy and healthy kid. In 2012 his mother and her boyfriend Isauro Aquirre take his custody and take him to palmdale.

What happened to Gabriel Fernandez?

He always dreams to have happy family. He was excited when his mother takes him with her but he never knew that his mother will ruined his life. Pearls used to beat him with metal, sometimes even cuts his hand skins, rarely gave him foods and the worst part was that being a mother she enjoyed her child pain with her mental ill boyfriend. Gabriel never complained about his mother behavior with anyone but his school teacher noticed Gabriel changed behavior. Sometimes Gabriel used to asked her some silly questions like is it normal for parents to beat their children, does normal family live like this and soon. Teacher felt surprised listening to him then she became aware about his home environment as she find cuts and crabs in Gabriel body.

She want to protect him so she informed social child welfare about the situation but social welfare failed to collect evidences and as a result his mothers tortured gets on next level. She forgets humanity and beat her own child like a hell. No human can imagine such behavior.

In may 22 2013, pearl called in 911 and reported that her son was not breathing. Later when Gabriel was tested that it was found that his brain was bleeding and dead two days ago, his brain skull was fractured his 12 ribs was broken and his body was burn by cigarette beside that he was focused to eat his own vomit. It is hard to believe but an eight years old child was killed by her own mother with hilarious and painful torture.

Why Gabriel siblings were tested?

When Gabriel was killed his siblings were like 12, 11 years old. They were tested in other to know whether they are facing physical violence or not. It wasn’t surprising to know that they are a victim too. But they even claim that their mother used to beat Gabriel more than others. She makes him forced to eat cat faeces, his own vomit, beat him naked with metal. She gave him more pain and she enjoyed his pain his fear with her boyfriend.

What happen to Gabriel mother where she is now?

In court it was cleared that pearl was suffering from mental illness, she was not able to control her emotion and temper through which she killed her own son. She even accepted that most of the time she used a high dose of medical drugs through which makes her incapable to think about her actions and emotions. She even admitted her crime and she felt guilty and sorry for her crime. She was charged for 1st-degree murder which was enough to give her death penalty but she was punished to spend her whole life in jail. Now she is in chowchilla state women prison and her boyfriend is on death row at San Quentin jail California.

Why Gabriel and pearl Fernandez in trending?

Gabriel was killed in 2013 and it’s been seven years and suddenly the news is trending worldwide. Suddenly peoples are being more concerned about the Gabriel murder cause of the documentary “the trials of Gabriel Fernandez” which is available in Netflix. The documentary is based on real crime story and it grabbed public attention. The documentary shows how psychopath mother killed her eight years old son and exactly express what the son was facing. Now the documentary gets public attention and peoples are showing their gratitude towards the eight yrs old murdered child and they are demanding the death and extreme level punishment for that cruel mother. They want proper justices for child soul as they seen in reel the pain the child was going through which makes their heart cry.